The HID SIO (Secure Identity Object™) is a data model for storing and transporting identity information in a single object. SIOs consist of a number of independent but associated data objects for such items as physical access control (card numbers for example), finger print templates, and cash on card. The collection of this information in an SIO ensures the proper coupling of related data - i.e. guaranteeing that one individual's card is not associated with another individual's fingerprint. SIOs can be deployed in any number of form factors, including contactless and contact smart cards, smart phones, and USB tokens. When combined with an SIO interpreter on the authentication (or reader) side an SIO based system functions the same as a traditional card and reader system with enhanced levels of security, portability and flexibility.

Data within the SIO is secured with a wrapper that provides key diversification, authentication signatures, and encryption. SIOs can be deployed into a number of device form factors and provide a layer of security independent of device specific security (iCLASS, MIFARE, MIFARE Classic, DESFire, EV1, Indala). 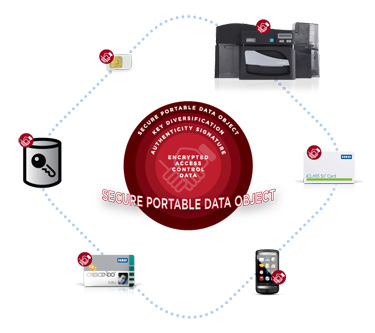 SIOs are designed such that they can be used in environments with multiple device types and varying security requirements. Portability is achieved because the same SIO stored on one device can be easily moved to and used on other devices as required.

SIOs are defined using open industry standards that provide infinitely flexible object definition. This definition can support any piece of data, including access control, biometrics, vending, time-and-attendance, and many other applications. Unlike the traditional fixed-field structures used in today's access control card and reader systems, the SIO and associated interpreters are designed to support future identity technology advancements and security requirements.